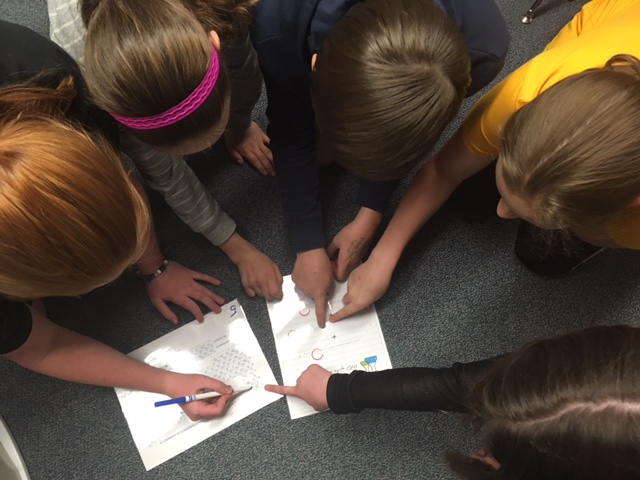 Chances are, you’ve seen an “Escape Room” pop up in your community. Or maybe you have one of the hugely popular “Escape Room” apps on your phone like “The Room” series or “Can You Escape?”. Escape rooms are an exercise in problem solving and teamwork where you have a predetermined amount of time to successfully break out of your locked room. It seems no one can resist the challenge, including former President Obama and his family who successfully broke out of an Escape Room in Hawaii on Christmas Eve with only 21 seconds to spare (crediting Malia to their team’s success). With the popularity and irresistible nature of these escape rooms, it was only a matter of time before a team of savvy educators would try to emulate this experience in their classrooms. Enter BreakoutEDU.

I was first introduced to BreakoutEDU at IFLT in Chattanooga last summer. I had no idea what BreakoutEDU was, but I knew that if my former colleague, Leslie Davison, was running the session, it would be filled with ideas to inspire innovation in my classroom. And boy, it did not disappoint! Leslie brought out a box locked up tight with 5 different types of locks- a 3 digit lock, 4 digit lock, a 5 letter word lock, a directional lock and a key lock. Leslie introduced the premise of the “Time Warp” game- and we were immediately tasked with a scavenger hunt to find our clues to crack the codes to break into the box. To us, it didn’t really matter what was in the box, we just HAD TO GET IN!

We worked together searching the room for hidden clues, deciphering codes, and solving puzzles (attempting to avoid red herrings) to win the game and not be stuck in the “Time Warp” for eternity. It was heartbreaking when we didn’t manage to unlock all the locks of the box in time! Leslie took our picture with our pouting faces holding signs of shame that admitted defeat. But inside, I was super psyched- this could be AMAZING in a language classroom. I bought my first kit from BreakoutEDU before the end of that session, and spent my iFLT breaks searching through the BreakoutEDU site for published language games.

The BreakoutEDU site has many premade games for various subject areas, but not many for novice-level Spanish learners, so I knew I would have to create my own. That evening at IFLT was spent in my hotel room brainstorming my first BreakoutEDU game. I soon found out that creating a good game takes time, and could not be done in one night- or even several nights! However, my BreakoutEDU box was ordered and on its way, so I was determined to have a game ready to deliver once the school year began. I decided to use a premade game from the BreakoutEDU site and translate it to Spanish to use on the very first day of school. To heck with trite ice-breakers on the first day- we were going to dive right into the interdisciplinary, problem-solving, at least 95% comprehensible fun! 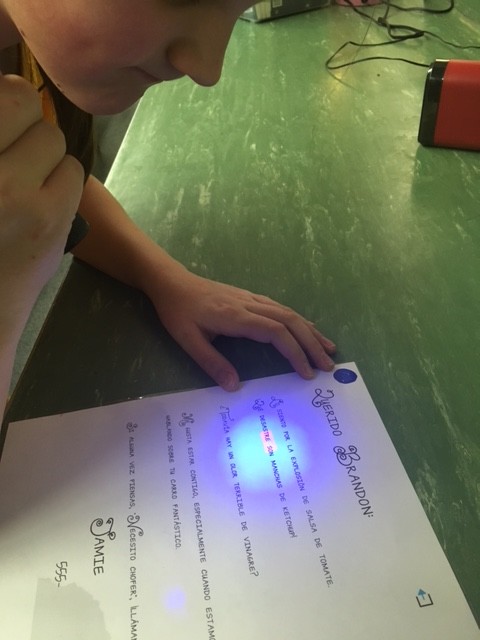 I chose “The Case of the Mondays” since I knew my incoming 1B students already knew the days of the week, and the puzzle was filled with cognates (planets and months of the year). I teed up the story with an animated PowerPoint explaining the premise of the game: all the days of the week were stolen- EXCEPT for Mondays. Then I brought out the box and watched the jaws drop. These kids were chomping at the bit to get started! I broke my classes into groups – 4-6 students per group, and they used tickets to log their answers. Each group needed an “educated guess” for all the locks written on their tickets before attempting to open the box. (This prevented some kids from standing at the box trying random combos instead of actually solving the puzzles- and if your students are like mine, there is sure to be one successful hacker!) If one group was successful in opening the box, they officially won the game, but I locked the box up again to allow any other groups to attempt to open it as the Breakout time allowed. About half of my groups broke out in the allotted time, but even some of the groups that weren’t successful were asking to come in at lunch to keep going!

Since that lesson, I knew that BreakoutEDU games were something I wanted to incorporate in my lessons on a fairly regular basis (aiming for one breakout per quarter), but that seemed daunting. I only had two incomplete games in the works, and translating games doesn’t always work. (Even in “The Case of the Mondays” I had to keep one of the clues in English because it didn’t translate well.)

Imagine my delight when I learned that the amazingly creative genius, Martina Bex, (SOMOS, The Comprehensible Classroom) had also caught the BreakoutEDU bug! I already use her “Sorteo Extraordinario de Navidad” and “Justino” units during the holiday season, and she had made one that aligned with the new Lotería de la Navidad commercial, “Carmina”! True to form, Martina’s game delighted in so many ways: an engaging CI story? Yep. Authentic resources that incorporate culture? Check. Cute graphics? Of course! It was a home run, and I will definitely be playing this game every year before winter break. Since then, Martina has cranked out two other BreakoutEDU games- ‘Escape con Abuela’ and ‘¿Cuba o Casa?’ which have received rave reviews from dozens of Spanish teachers on the “Breakout en Español” Facebook page.

It was time for me to create a game. I looked to my favorite resources to inspire me. El Nuevo Houdini was an obvious choice. This novel is consistently a favorite of my students for so many reasons- cool car, teen romance, breaking the rules and getting away with it? It’s like Ferris Bueller’s Day Off but in comprehensible Spanish! A Breakout game seemed like a great way to celebrate the completion of the novel. The game is a sequel to the novel, Brandon’s parents are going on vacation again, but this time grandma knows Brandon’s tricks and has locked the keys to the T-bird in a box. This game came together better than I could have expected-the kids loved it, and I knew I wanted to share it with the CI/TPRS community.

Ready to get going? Here are some tips to get you started!

Try this breakout created for the novel El Nuevo Houdini by Julie. Special thanks to StoryboardThat.com for granting us written permission to publish storyboards created with their fabulous website! Be sure to check them out! 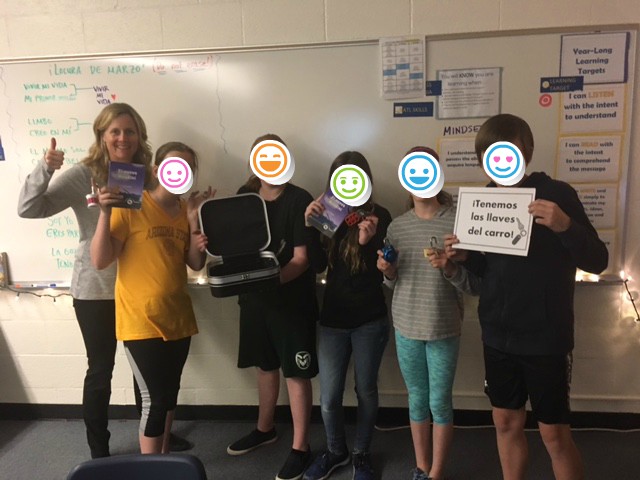 Julie Thompson has been a Colorado middle school Spanish teacher for 15 years. In her free time, she enjoys skiing, biking and boating with her family and learning about new teaching strategies to engage and inspire.