In 2010 I was fortunate enough to travel to Argentina and study the Dirty War as part of a course through the University of Denver. The class was through the Jewish Studies department and focused on the disappearance of the Jewish population in Buenos Aires from 1974-1983. I was horrified to learn of the US involvement and always fascinated to see how locals reacted when I asked them questions about their country’s murky past. There were three distinct reactions:

My favorite part of my time in Buenos Aires was visiting the Plaza de Mayo and meeting the mothers and grandmothers who’d lost their loved ones. They used to March every single week but most are too elderly now and just march together once per year. It is truly an incredible thing to witness. Many of the women carry the same white panuelos that they did some 30+ years ago, with the names of their children written in blue across the worn white fabric.

While I was there, I saw several compelling commercials on local TV channels. These posed questions to the general public such as: “Do you ever wonder why you don’t look like your mother or father?” or “Have you ever asked to see photos of your mother pregnant with you, only to be turned down time after time?” Next, the commercial would state: “You may be a lost grandchild of the Mothers/Grandmothers of the Plaza de Mayo.” These women had started a campaign, a determined fight to find their lost grandchildren. Children who were born in captivity during Videla’s dictatorship over Argentina. Many of these children were adopted out to government officials or officers in Videla’s army, often the very people who had committed the atrocities. This April, the 129th grandchild was “found.” Here is an article about it. If you read the novel in the past or are reading it now, it would be awesome to talk about this in class. Here is a powerful video of the Abuelas announcing this to the press with an elated man at their side, her father, who had been separated from her for 42 years, since his wife went missing when she was 8 months pregnant.

As a preface to reading the Fluency Matters comprehension-based reader La Guerra Sucia, I always do an activity to open students’ eyes to the unimaginable choice so many Argentinian people have had to make over the past four decades. It is an awesome hook to the reader.

I will describe for you my approach to the “hook” for teaching this reader that I have used with success. I’ll describe it for you in English. However, all of this would be done in Spanish. Students reading La Guerra Sucia are going to be at a high enough proficiency level and should be comfortable enough with the language you use that they can listen and understand with their eyes closed.

After students have entered the room, and have settled down, address them with a serious and somber tone. Shut off the lights. Tell them to close their eyes. Next, tell them, “I am going to present you with a scenario… Imagine yourself exactly as I explain in this scenario. Stay silent, and at the end, I am going to ask you to open your eyes and make a choice.” Then, set it up with as much backstory as you’d like. I love to take the opportunity to recycle all of our high frequency vocabulary and really create a story for them to picture in their minds. For added suspense, I put this music on very softly in the background.

“It is a normal day, just like any other… It is beautiful outside, you wake up early in the morning, find your clothes and make your way to the bathroom where you brush your teeth and think about the day ahead and the math exam that you’re not ready for. Your mom calls from the kitchen and reminds you that you’d better be heading out soon or you’ll be late. As you walk down the hall you pass family pictures of you and your parents over the years. Your vacations and the first day of school, and that time you went to get ice cream and your dad bought you an extra scoop only for your dog to jump up and eat the whole thing! So many memories.

You shout goodbye to your parents and dad yells after you “I LOVE YOU, kid!” When you get to school, you head straight to your first class and sit down and catch up with your friends about their weekends. Your teacher begins instruction and is interrupted by the principal coming into the room, she asks to see you in the hall. You follow her, and see she is accompanied by a small group of people. “These individuals want to ask you some questions. You can sit with them in my office if you’d like.” This is so strange. You’ve never seen these people before and you have no idea what sort of questions they’d want to ask you. Did you do something wrong? As you walk to the principal’s office you start racking your brain, what have you done in the last month. What could this possibly be about!? Before you know it, you’ve arrived and you all sit around a small table.

The woman across from you tells you that you’re not in trouble…she must’ve seen the worry on your face. She then says that what they’re about to say might come as quite a shock and it may be upsetting. The man next to her says, “We have reason to believe that you are the grandchild of one of the Grandmothers of the Plaza de Mayo”

“That is impossible” you think to yourself. Those are the women who march together every Thursday, protesting the disappearance of their children. He goes on and says “We have further reason to believe that the man you’re living with, who calls himself your father, is actually partially responsible for the torture and disappearance of your biological parents.” You think of your dad. “No way,” you think “no way is this happening right now…” The woman speaks again and says, “we realize this may be upsetting but we would like to offer you a DNA test to see if our suspicions are correct. You do not have to take it, it is voluntary, but if you choose to, we could reunite you with your biological grandmother who has been searching for you for years.” You think about your parents. Could this be? You’ve never seen a picture of your mom pregnant and you always have looked so different from both of them, but never did you ever think it could be because they weren’t your actual parents! You look up at them. They look at you with anticipation… Now what?!

Next you ask students to keep their eyes closed and to make a choice. Do they:

Ask students to open their eyes when you say, and tell them to indicate which choice they made by standing up and moving to four corners of the room. Tell them which corners they should move to based on the four choices. You may have to repeat the choices two or three times. Once students have moved and made their choice, acknowledge what an unimaginable situation and choice it was. Then go into a discussion with them about this reality that so many people in Argentina have faced over the past 40 years. Explain that the “children” are no longer in school and they’re now in their late 30s and 40s. If your class is advanced enough, you could lead them in a debate or socratic seminar to talk about why they chose the choice they did. I did this when I taught La Guerra Sucia in AP! It went really well! This is SUCH a compelling topic!

I hope you’re having a wonderful week and I hope that this activity is useful to you if you’re reading or thinking about reading La Guerra Sucia! 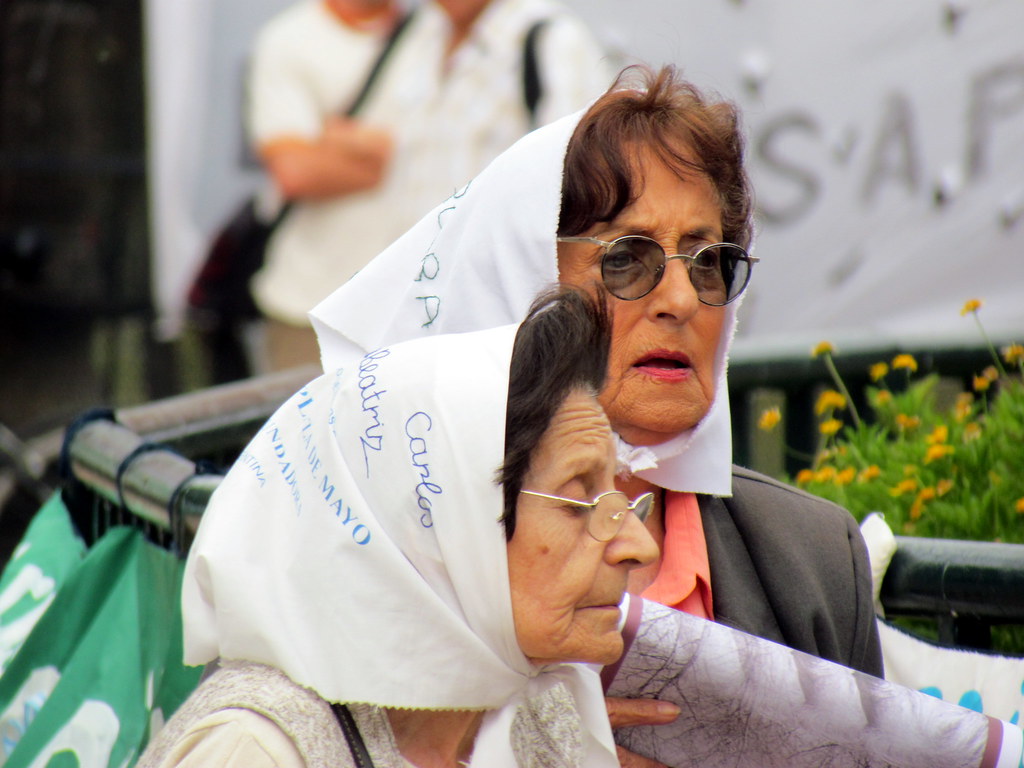 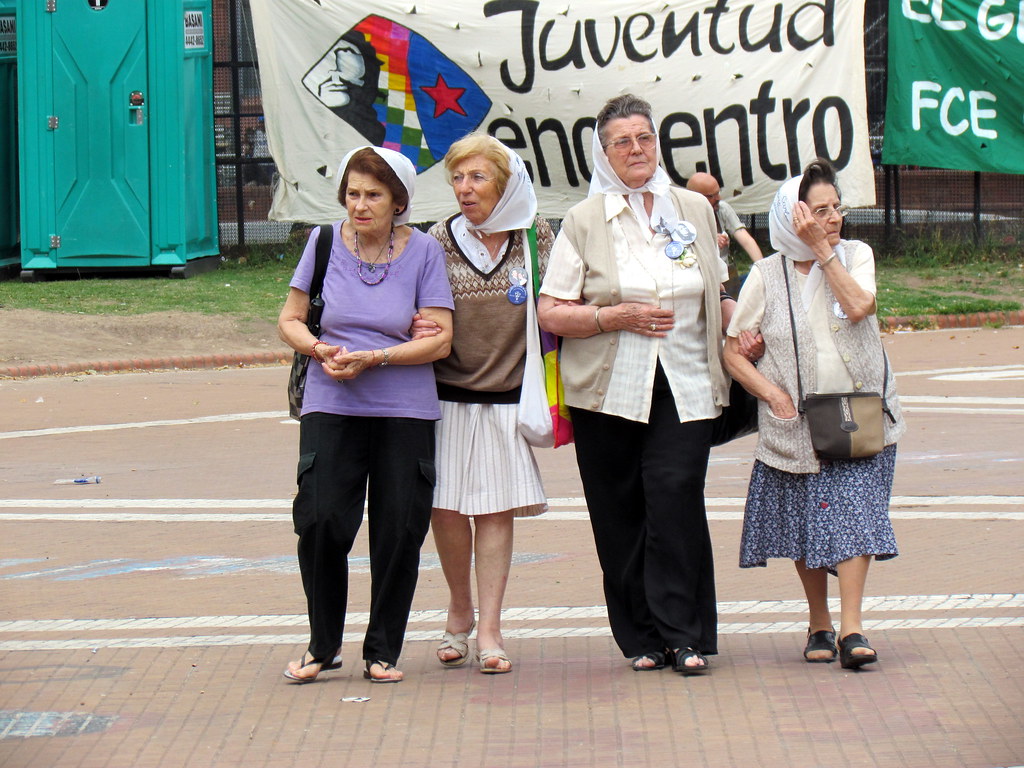 Fluency Matters is proud to offer both live webinars and on-demand training! Join us any time of the day or night! #PDinyourPJs